Automotive test dummy is mainly used for automotive enterprises to test the safety of driving experiments, simulating various parts of the human body and structure, while the distribution of a wide range of sensors, to detect the simulation of the human body in various situations in the process of car driving test, so as to assess the safety performance of the car, Shanghai Qianshui Precision Electromechanical Technology Co. In addition, the Qinsun R & D technical engineers for the role of the simulation parts to do some simple explanation, I hope it will be helpful to customers. 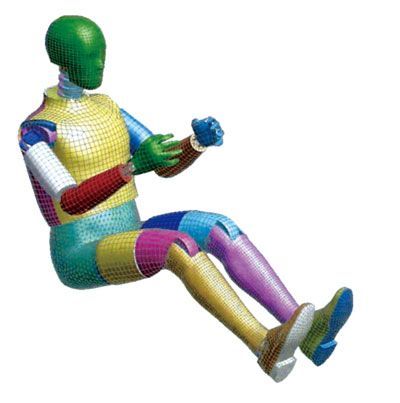 Head：
The head of the simulator is an aluminum skeleton, rubber as the "flesh" to cover it, which is installed with three acceleration sensors, used to test the acceleration and impact force on the head in the collision.

Neck：
The measurement device mainly measures the size of the impact force on the neck in the collision, the magnitude of the neck bending back and forth and moving from side to side after the force.

Arms：
The simulator's arms are not carrying any sensors, so they will swing freely in the collision without restraint, although this is unlikely to happen in reality, but in fact, the protection of the arms is now also very important, but also very difficult to do. But there is no good test indicators and measurement standards.

Fierce part (frontal impact)：
The dummy has the same size metal ribs as the year, to test the front occupants in the frontal impact when the ribs, the thoracic impact force has been in the impact of the thoracic deformation magnitude.

Fatal part (side impact)：
The simulator EuroSIDII was used for the side impact, and three different sensors were loaded on the three ribs to test the magnitude and rate of compression of the thoracic cavity during the side impact.

Abdomen：
The abdomen of the dummy was equipped with a sensor that could test the impact force to test how much impact would cause abdominal injury.

Pelvis：
A sensor was installed in the lumbar region to record how much force in a collision would cause joint dislocation and pelvic fragmentation.

Thigh：
Tested using the HybridIII simulator, this test area consists of the pelvis, thighs, and knees. A sensor mounted in the thigh is responsible for collecting data from the frontal impact and recording the area and extent of the injury, tearing and dislocating the femur in more severe impacts, while a special sensor is specifically designed to measure the force of the impact on the driver's knee from the steering wheel.

Calf：
Sensors in the calf are responsible for measuring the simulated calf in how hard the impact will be fractured, bent, crushed, etc., and also test the knee and calf bone, ankle bone and the probability of injury to the part of the connection between the calf bone.

Feet：
Measures the chance of injury to the driver's foot in a frontal impact, which is determined by the amount of deformation near the pedal where the foot is placed and the distance of compression into the vehicle.