The development of Male thermal manikin can be divided into three stages. In 1941, the scholar Gage of the John Pierce Laboratory of Yale University in the United States published an article in the American Science Journal and proposed the definition of the Crowe value, that is, when the temperature is 21°C , The relative humidity is less than 50% and the wind speed is 0.1m/s indoors, the thermal resistance of the clothing worn by a healthy adult while sitting in a comfortable state is 1 crore. The combination of conditions can be understood and accepted by non-professionals. The U.S. Munitions Climate Research Institute developed the first generation of Male thermal manikin on this theoretical basis. Since the Male thermal manikin is a single-stage dummy system and cannot reflect the temperature distribution of the human body surface, the first-generation Male thermal manikin can only be used for general testing of thermal resistance of clothing and obtain the thermal resistance value of static clothing.

In the 1960s, people developed multi-segment Male thermal manikin, the second generation Male thermal manikin. The body surface temperature and heating system of each segment are individually controlled, and the dummy body can simulate different postures of the human body and perform some simple actions to perform clothing. Static and dynamic testing of thermal resistance. 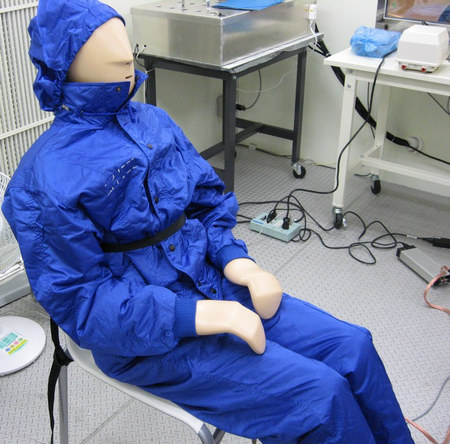 The third-generation Male thermal manikin can simulate human sweating, and can do more complex movements, which can more realistically and fully reflect the heat and moisture exchange process of the human body, clothing and the environment, and comprehensively evaluate the heat and moisture transfer performance of the clothing. . In the 1970s, the sweating copper man was used to study the moisture permeability of military uniforms, and the sweating Male thermal manikin was also used to study the thermal properties of civilian clothing.