The meaning of burning dummy system to mankind

Studies have shown that burns may occur after the flash fire is over, and the energy stored in the fabric is also an important factor in predicting burns. Therefore, even if the thermal protective clothing can withstand the flame burning for a short time, the clothing can still cause burns during the cooling process. Therefore, it is particularly important to study the changes in the surface temperature of clothing and human body after burning. 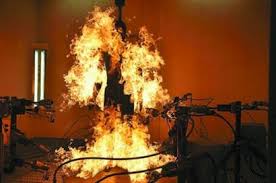 Research on multi-layer protective clothing using TPP instrument (thermal protection performance tester) shows that the outermost fabric has an important influence on the protective performance of multi-layer protective clothing. Using TPP instrument to test, it is found that long-term exposure to a heat source with low heat flux is more likely to cause burns than short-term violent combustion. In the actual wearing process, the thermal protection performance of clothing not only depends on the performance of the fabric itself, but also needs to be comprehensively considered from the aspects of clothing style design, specifications and dressing posture. In order to simulate the situation of the human body in the actual fire field as realistically as possible and to safely and accurately determine the surface temperature of the clothing and the human body, the test method of the Burning dummy system shows its advantages.

The above is the detailed content of Burning dummy system that QINSUN will answer for you. Of course, if you want to know more about it or have purchasing needs, you are welcome to consult.